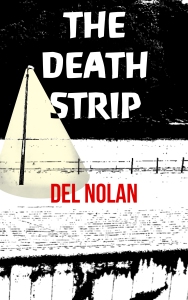 The Death Strip is now available on Kindle. Yay! Here is the link.

For anyone who hasn’t read chapter 1 you can check that out here.

Alternatively, you can get a sample 15% on your kindle here.

Many thanks in advance.

It has been so long since he spent a prolonged period of time in daylight, Ritter reckons he could see in the dark without a torch. His eyes have adapted; his pupil’s wide, gaping and thirsting for what little light bounces off the dirt.

They cramp into their tiny tunnel, barely high enough to allow them to crawl on their hands and knees and not wide enough for an average sized man to turn around. Ritter is bigger than an average sized man. He’s probably bigger than anyone else who will try to squeeze through here. If he can fit, then almost anybody else can. He has to enter the tunnel head first and exit by shuffling backwards, reversing himself out. Initially, this wasn’t much of an inconvenience, but after a couple of days when the tunnel began to grow longer and deeper, stretching further into the earth, it got harder and harder to manoeuvre. He wriggles up the passage forty meters or so with an empty sack, fills it with the excavated earth and reverses, dragging the full sack the whole way back in front of him.

Each of them would do this twenty to thirty times a night. It wasn’t long before they had worn holes in the toes of their boots from dragging their feet behind them. They have also developed scabs all over; on their elbows, wrists, hands and knees; even on their backs and on their bellies. They have grown used to these sores. Some of Ritter’s wounds have sealed and turned to hard skin and he can’t feel them anymore.

He can’t be sure of how well supported their tunnel is. It could collapse at any time. The timber structures that they have pieced together to hold the ceiling up have been salvaged from anywhere. Timber for building is not a freely available commodity. Furniture was dismantled, timber floors pulled up, doors removed from their hinges and chopped into beams; some of it old, some of it wet, none of it completely trustworthy.

They work in silence. They made sure of that, before they started. While they were digging, no-one would even whisper a word. They devised a number of hand signals and torch flashes that they would use for the very limited communications that they would require. A thumbs up means a bag is full enough to remove. A ‘T’ shape with their hands means a supportive timber frame is required. Flashing the torchlight repetitively means police. They thank God that they haven’t had to use that one yet and pray that they never will.

They have worked non-stop for every hour of darkness, barely stopping to eat, hacking at the top of the tunnel with small picks and chisels and hammers and shovels, putting gravel into sacks and dragging it out to the end. Whilst one is digging, the other two remove the earth. They take it in turns.

Ritter is moving the earth now. He works hard and fast. He hopes to be finished tonight but they are running out of darkness. It will be morning soon.

He drags the heavy sack with him, moving about half a meter at a time, breathing the warm, oxygen-deprived air heavily, whilst trying to remain quiet. His muscles have grown strong from this repetitive motion; shimmy back and pull; shimmy back and pull; over and over until he can feel the fresh air rushing into his lungs.

Bergen waits in the burnt-out shell of a car at the entrance. That was another one of the priest’s ideas; to cover the entrance of the tunnel with a broken-down, old wreck of a trabant. They had cut a hole out of the bottom of the car underneath the moveable passenger’s seat. The seat then acted as a secret door giving them access to the tunnel. Bergen waits, hunched down low in the driver’s seat to avoid being seen, ready to dive in with his sack and collect another load when it is his turn. Ritter emerges and gives Bergen a nod to let him know that the way is clear and Bergen disappears down the hole, out of sight

Ritter straightens his back when he is out of the car and has freedom to move once again. His bones crack as he does. He swings the sack over his shoulder and moves swiftly and silently across the street. He tries not to breath. He is afraid that he might not hear something or someone if he breathes too loud. He must remain alert, even at this late stage; especially at this late stage.

He navigates down the empty streets in the dark automatically. Down one and over another until he is on a street lined with old four storey detached townhouses. He approaches the house nearest him at the end of the street and descends a set of steps into the cellar.

He gives the door a gentle four beat knock. An old man answers the door, saying nothing, and Ritter walks past him, heaving now under the weight of the sack.

This cellar is the residence of Bergen, his wife, his five children and his father; the old man that opened the door.

Down here a family of eight reside in a two-roomed cellar and one of the rooms was all but full of the gravel Ritter and his companions had extracted from the ground.

Ritter admires this family. They have given up a lot during these last four months. He moves past the lines of sleeping bodies stretched across the floor, their one bed now being used to prop up the tunnel. He empties the sack into the other room. The ground is piled high against the back wall and it slopes down and out towards the door. The more they dig, the more they cramp this family into a smaller and smaller space. Ritter notices small castles built from the gravel; the product of a day’s play.

The sound of his tiptoeing and the pouring gravel used to wake the children regularly during the night. They’ve grown accustomed to it now. The older ones might just occasionally cough and turn in their sleep, the constant clouds of dust catching in their lungs.

They sleep cosily in a line amongst the coats and the blankets and the single mattress that they all try to share. Bergen and his Dad will lay their heads down in the same spot in a couple of hours.

It is for families like this and many more like them that Ritter risks his life. They are willing to give up what little they have, to try and escape the empty future that awaits them. It doesn’t take an educated man to see that it is not right.

He nods to Bergen’s father as he leaves again, moving quickly down the streets and back to the car where he sits and hides and waits for Bergen to surface, who does so soon, and Ritter slides in head first and begins a rapid crawl up the tunnel. It’s much easier going forward with an empty load.

When he reaches the top, he grabs Kuhlbert’s foot and tugs on it, the sign for a change. There is barely enough space for them to pass each other. Ritter lies flat on the ground and allows Kuhlbert to crawl backwards out over him. They have done it so often now it has become one swift movement. Now Ritter is digging.

He beats up at an angle with the small pick-axe. He doesn’t have much room to swing it but he has learnt to swing it with less strength, faster and repetitively. He finds that this is the most efficient way. He lets the gravel fall underneath him gathering it into a small pile where Kuhlbert takes it from, scooping it into the sack.

It continues like this, picking, picking and picking, then scraping it with the shovel, then picking, picking, picking again, all the while gasping at the air so as his brain might get a taste of oxygen, until he hears it. He hears the crumbling sound as the edges of the tunnel begin to fold back and the earth tumbles in on top of him, falling into his eyes and into his mouth. He spits and wipes his eyes on his sleeve.

The cool night air comes down to greet him and he breathes it happily, elated by their achievement, and relieved that the tunnel didn’t collapse on top of them at some stage and kill them. It is a relief.

He pulls his head up through the hole and takes a look at West Berlin from a perspective never before seen. The wall stands behind him. They had done their sums correctly. They have dug up at the right side of it but close enough to it to remain out of view of the watchtowers behind it.

He reaches his arms over the edges of the hole and pulls himself out through it and stands on the grass at the other side. ‘I am a free man now!’ he thinks as he gazes up at the four meter wall. Not for long though. He must find something to cover the hole and return to the East. His freedom will have to wait.

He and Kuhlbert pull some twigs from a nearby tree and dress them over the hole. They looked at it. In the dark it seemed inconspicuous enough. They don’t think anyone will find it anyway, unless they are looking for it, and nobody would be looking for it at this side of the wall.

They returned down the hole and pulled the twigs behind them, back out over the newly erected entrance to the tunnel. They then climbed back down the tunnel head first for the first time.

They got to the other end where Bergen was waiting with a look of worry on his face.

‘What happened?’ he asks.

He wishes he had some way of marking their achievement; some way of celebrating. As he thinks this, Kuhlbert produces a box of cigarettes and offers them around. They smoke one each, quickly and in silence, smiling at each other, and when they are finished, they leave for their homes.

Thanks again for reading.

23 thoughts on “The Death Strip Chapter 2”